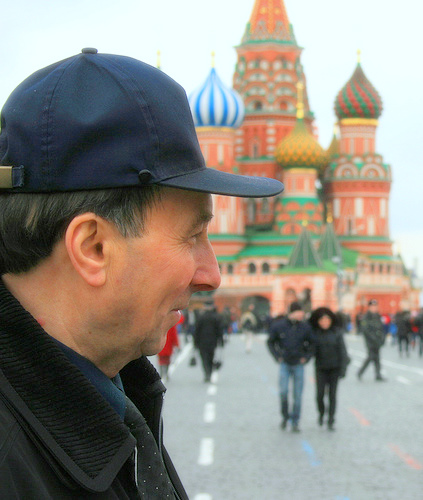 Today they celebrate the so-called “Men’s day” in Russia. Officially, as the name Defender of the Fatherland Day suggests, the holiday celebrates people who are serving or were serving the Russian Armed Forces (both men and women), but unofficially, nationally it has also more recently come to include the celebration of men as a whole, and to act as a counterpart of International Women’s Day on March 8.

I feel it’s a good occasion to say a few warm words about my father who is an amazing person. A father’s role in a girl’s upbringing is often underestimated. In reality a father is crucial, for he serves a model of male virtues and behaviour, motivates and fascinates… I have always been a “dad’s daughter”, I took after him not only in my appearance but also a lot in my character, attitude to life and values.

I had a great luck with a father who gave me high standards of human values such as idealism, honesty, intelligence, balance, trust to people, positivity, responsibility, discipline and honour. My father was born 1949 and belonged to the generation that dreamt of becoming cosmonauts (space men) and candidly believed in the glory of Communism. He became a paratrooper, man of airborne troops and served till the rank of colonel. He was a true officer at heart, dedicated and noble in an old-fashioned manner. He served 2 years in Afghanistan war at 80-s and later on graduated from the Frunze Military Academy (for post-graduates military) in Moscow with a degree in Military Analytics and Strategy. Well, he made a good career and has had an interesting life. END_OF_DOCUMENT_TOKEN_TO_BE_REPLACED

This special day is my favorite in the Christian tradition. Having an atheistic background, I have been always deeply touched by the candid Christian Orthodox celebration of “Forgiveness Sunday”.

The last Sunday before Great Lent, is the day when Orthodox Christians remember the expulsion of Adam and Eve from Paradise. “Forgiveness Sunday” received this name from the pious custom at Vespers of asking each other’s forgiveness for discourtesy and disrespect. People do so, since in the forthcoming fast they will approach the sacrament of Penance and ask the Lord to forgive their sins, which forgiveness will be granted us only if people themselves forgive each other. “If ye forgive men their trespasses, your heavenly Father will also forgive you. But if ye forgive not men their trespasses, neither will your Father forgive your trespasses.” (Matt. 6.14, 15)”

Since the 90-s when religion slowly started getting its position back with the peoples of Russia, the tradition of Forgiveness Sunday came back. According to it, you can ask forgiveness of every person you meet this day, but especially people whom you might have really done some harm, or just your relatives and friends (we never know if by chance we could have hurt anyone!). END_OF_DOCUMENT_TOKEN_TO_BE_REPLACED

Despite Christianity being an “official” religion in Russia, Russians have always been deeply pagan. Apparently most of the rituals and traditions of Russian Orthodox Church rooted in the pagan culture of pre-Christian Russia. In the same way the tradition of fortune-telling nights straight after the Russian Christmas (7th January) – is still popular, even after over 1000 years of Christianity.

Since many years my girlfriends and me, we meet after the Russian Christmas to enjoy a special way of fortune-telling, originally in South-Russian tradition. We make and eat VARENIKI – a kind of stuffed dumplings: stuffed with food and “telling objects” 🙂

As a stuffing we normally use smashed potato and mushrooms, however for the sake of fortune-telling we used some other things as well:

Here on the plate you can see:

Then vareniki were carefully and artistically stuffed:

What is special about New Year celebration in Russia December 30, 2008

image of a poster in Moscow

What is special about the New Year celebration in Russia? – No, not the amout of vodka being taken upon, although Russia is  notoriously famous for that.

There is something just opposite to the vulgar tradition of collectively getting drunk – there is a tradition of a sweet innocence, accopanying the arrivial of the New Year… So what is it then?

Ded Moroz (“Grandfather Frost”) is pretty much similar to Santa Claus, However, unlike the secretive ways of Santa Claus, he often brings presents in person, at the celebrations of the New Year, at New Year parties for kids by the New Year Tree. Generally, the traditional appearance of Ded Moroz has a close resemblance to that of Santa Claus, with his coat, boots and long white beard. Specifically, Ded Moroz wears a heel-long fur coat, a semi-round fur hat, and white valenki or high boots (sapogi), silver or red with silver ornament. Unlike Santa Claus, he walks with a long magical staff, does not say “Ho, ho, ho,” and drives no reindeer but a troika.

These are basically some differences which are rather understandable. But there is a female figure next to Ded Moroz – which is a very Russian tradition, not known anywhere around the Chrisitian world (didn`t I mention in my earlier posts, the attitude to women is special in Russia?)…

Ded Moroz is being accompanied by Snegurochka(” Snow Maiden”, his granddaughter). She is a beautiful (young) girl with a long blond plate wearing white or light blue fur-coat. END_OF_DOCUMENT_TOKEN_TO_BE_REPLACED