The booksellers all over the world report the recent increase of sellings of Karl Marx’s Das Kapital/Capital. Apparently it is the young people who are looking for that treatise on political economy – trying to understand the current economical crisis.

So what is there is that 2000 page work, which is being second widely spread book after the Bible?

Though Marx is very concerned with the social aspects of commerce, his book is not an ethical treatise, but an attempt to explain the objective “laws of motion” of the capitalist system as a whole, its origins and future. He aims to reveal the causes and dynamics of the accumulation of capital, the growth of wage labour, the transformation of the workplace, the concentration of capital, competition, the banking and credit system, the tendency of the rate of profit to decline, land-rents and many other things. END_OF_DOCUMENT_TOKEN_TO_BE_REPLACED

We always think of a saint as a man – at least that is the first thought that normally comes to our mind. Have there never been holy women? Or if there are – why are they so unknown?

I found some intresting insight into that topic:

“In addition to the(Knights)Templars and the enlightenment of a saint such as Bernard of Clairvaux, the Middle Ages saw the blossoming of mysticism amongst woman saints. Although their spiritual greatness was marginalized in western culture, this movement grew to an extent unprecedented in western history. END_OF_DOCUMENT_TOKEN_TO_BE_REPLACED

The Theory of Six Degrees of Separation works! August 5, 2008

This is what I always felt – it`s a small world! Being an active and communicative person, I literary know thousands of people in person and many virtually. And the more people I get to know, the more I realise how small and cute the world`s village actually is! 🙂

The six degrees of separation argument, popularised by American psychologist Stanley Milgram (1967), posits that everyone is one degree removed from people they know, two degrees from people their friends know and no more than six degrees away from everyone on the planet.

The Microsoft team came up with the idea of using data from their Messenger client. The researchers took an IM message between two unnamed individuals as a link and then examined how to connect 180 billion different pairs of users in the database.They found the actual number of links was 6.6, although 78 per cent of the world’s population can be linked in seven steps or less. However, some took over 20 links to find a connection.

One of the researchers on the Microsoft Messenger project, Eric Horvitz, said he had been shocked by the results. END_OF_DOCUMENT_TOKEN_TO_BE_REPLACED

The recent study of an analytical center in Russia gives an insight into one pretty intriguing topic- what does female ideal look like? The cultural aspect plays here a crucial role – I wonder how much the results would differ in the other countries.

The study was done in Mai 2008 by the analytical center of SuperJob.ru. Representative number of Russian men gave thier opinion on the female ideal. Interestingly a strong differentiation has been found between a wife and a girlfriend. The grafic shows the results in Russian, I`ve made a short English summary here on my Shaktipower blog.

What are the 7 favourite things you enjoyed doing as a child?

I wonder if a childhood everywhere in the world is just the same, or is it much coloured by the cultural/social background? And how much does it reflect our adult life?

As a child I loved to:

And what about you? 🙂

I see a mountain from my window
Standing like an ancient sage
Desireless, full of love.
So many trees and so many flowers
They plunder the mountain all the time.
It’s attention is not disturbed
And when the rain pours like
Many pitchers of clouds bursting
And it fills the mountain with greenery.
The storms may come soaring,
Filling the lake with compassion
And the rivers flow running down
Towards the calling sea.
The sun will create clouds and
Wind carries on its feathery wings
The rain on to the mountain.
This is the eternal play
The mountain sees
Without desires.

Nikola Tesla on partiotism, science and the future of mankind July 28, 2008

You may remember my fascination for Nikola Tesla, that great genius of the 20th century (read my post on his awesome personality here). He was not only an inventor of Leonardo da Vinci caliber, but also a great visioneer of the future of humanity.

Interestingly, he saw the key to the happy future in the science serving people. And his understanding of science was rather spiritual, than materialistic. He saw science as a living process, the matter as a being. In fact, he was the only human being known who could controll and produce the lightning.

In that respect  I find it intresting to read his thoughts on the possbile (glorious!) future of mankind – and see, how such things like patriotism and science could be connected:

“As long as there are different nationalities, there will be patriotism. This feeling must be eradicated from our hearts before permanent peace can be established. Its place must be filled by love of nature and scientific ideal. Science and discovery are the great forces which will lead to that consummation….The consequences of such an advance are incalculable. END_OF_DOCUMENT_TOKEN_TO_BE_REPLACED

This time I want to share with you some awesome photos of Moscow that I found on some Russian photo-sharing sites. These are the pictures of Moscow taken from helicopter. I remember some of my readers wanted to see more of “true” Russia – I am happy to share it with you here, until my future Russian blog project starts  🙂

It is probably one of the most surprising findings over the last years – while the media keep showing us the disastrous pictures of our life, the recent study shows the amazing dynamics of happiness all over the world!

The world is getting happier, according to the cumbersome but compelling World Values Survey released Monday by the National Science Foundation, which managed to track and quantify joy among 350,000 people in 97 countries over a quarter of century.

“The happiness index rose in an overwhelming majority of nations studied,” the study said.

Denmark is at the top of the list – with India, Ireland, Mexico and South Korea experiencing a “steeply rising” level of happiness in the survey that asked respondents to succinctly rate their subjective sense of well-being and life satisfaction. Everyone was apparently happy to do so. The survey had an “exceptionally high” 97 percent response rate.

Zimbabwe, meanwhile, is in last place. Things aren’t so jovial in Armenia, Pakistan and Rwanda – among the last 19 nations on the roster. For them, national contentment flagged into the statistically negative zone.

Americans are in the comfortably warm and fuzzy upper levels. The U.S.ranked No. 16, behind Canada, Sweden, El Salvador and New Zealand but in front of Britain, Germany, France and Italy. END_OF_DOCUMENT_TOKEN_TO_BE_REPLACED 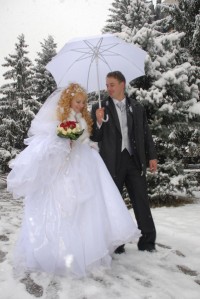 Russia is undertaking another wise step in revival its former values by establishing a new annual celebraiton – THE DAY OF LOVE, FAMILY AND FAITHFULNESS on 8 July. It sounds like a beautiful alternative to the famous Valentine`s Day to me. A celebration of a happy marriage filled with love and faithulness looks much more attractive than the one of the romantic “falling in love” (which mostly ends up unfortunate).

The idea of establishing the Day of Love on 8 July was born in Murom, a rich on traditions old Russian town where the Holy Spouses Prince Pyotr and Princess Fevronia has been celebrated since the Tsar times . The wife of the Russian President, Svetlana Medvedevahas now taken the patronage over the celebration. Upon her initiative, the symbol of the new annual Day of Love will be a daisy flower. The next year the celebration may get a status of an official Russian holiday.

I believe that a sound family is crucial for any society. Was it Lenin who said ” A family is a cell of society” ( I wonder if this phrase is known in the West)? It is quite obvious from what I see around that the people from broken homes have more difficulties with creating a happy family life themselves. Not only that – I see so many young and not any more that young people in Europe who are generally afraid of any long-time relationships (there is a special word for that in German “Bindungsangst”).  I find it very sad. People are looking for love, but they are afraid of that! They want the warmth of a close relationship, but they don`t know how to give this love and how to enjoy it 😦 The single-life is being propagated as the coolest life style (!). END_OF_DOCUMENT_TOKEN_TO_BE_REPLACED