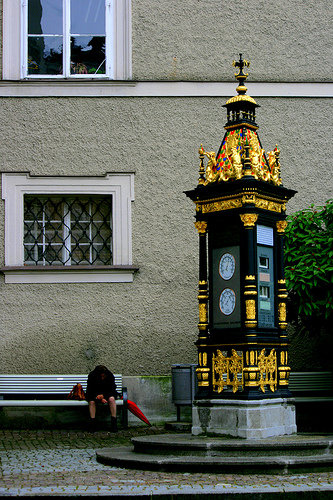 Today many, including economists and financial experts are talking about the end of the existing financial system due to a simple mathematical law: Compound interest follows the existing monetary system an exponentially growing curve (= off 1 is 2, 4, 8, 16, etc. – as opposed to linear growth from = 1, 2, 3, 4, etc.), and unlimited growth exponentially is mathematically impossible. Any system with exponentially growing system is an ultimately self-destructive, the end is predictable. In nature, quality growth prevails: Humans, animals and plants grow quantitatively until they have reached their optimal size, then they only grow more qualitatively. Exponentially growth occurs naturally only in connection with illness and death, eg the disease like cancer behaves exponentially (from one cancer cell, 2, 4, 8, etc.). The interest from the mechanism resulted in permanent growth of the forced economy is in irresolvable conflict with the mathematical impossibility, with the known consequences of such an unbearable social imbalance and life-threatening environmental degradation.

This situation sounds hopeless (if interested to learn about truly shocking backgrounds, see Chris Martenson’s “The Crash Course Money”). Margrit Kennedy, however, offers in her book “Interest and Inflation Free Money”  1996 , a positive outlook, because it shows not only the problem but also offers a possible solution for me (as an economic layman) understandable, reasonable, sensible and feasible acts. Margrit Kennedy, was born in 1939 in Germany and has been working many years as an architect, town planner and ecologist in Germany, Nigeria, Scotland and the USA. Since her ecological projects have often been dismissed as uneconomical, she became aware that an environmental measure had to be measured with the money-creating power of money in the capital market. She began to compare the growth patterns in nature and in the monetary system and the causes of the pathological compulsion to understand economic growth, and the function of the monetary system and the dangers of an economic or ecological collapse. Margrit Kennedy assumes that very few people understand exactly how money works and how it affects their lives directly or indirectly. She holds four misunderstandings for the main obstacle to understanding the design flaw in the present monetary system:

1)  Because of our own organic growth, we cannot imagine the real (self-) destructive effect of money growth. Margrit Kennedy denotes the interest rate as a “cancer in our social structure” .

2) We do not recognize the hidden effect of the interest rate mechanism in every price we pay interest portions are included (= the interest paid by the producer of the Bank for capital), in average include (without interest we would therefore theoretically richer by half) the price of goods and services for everyday life, 30-50% interest .

3) We believe that the current monetary system is all the same. In the present the monetary system does not take place by the interest rate a hidden redistribution of money from those who have less money than they need, to those who have more money than they need. 80% of the population pay more interest than they receive (about 10%), the ratio of paid and interest received is balanced, but 10% of the population received about twice as much interest as they pay, namely the portion that the first have lost 80% of the population. Margrit Kennedy calls this a far more subtle and effective form of exploitation than the one that Marx was trying to fix (this was, however, in his day not been so apparent as today, is taking place, the distribution of added value to an ever greater extent set forth in the monetary sphere).

4) We keep inflation for an implicit part of any monetary system, however the inflation is governments created specifically for the worst problems of rising debt (debt and debt interest rates grow faster in economies than incomes, which lead to the collapse must) be overcome, However, as this has a different form of taxation. The interest rate is (in addition to raw material shortages, wars and military spending) the main cause of inflation.

Margrit Kennedy argues that through interest and compound interest as the price one pays for money, money has itself become a commodity, and that most coveted of all commodities, goods and it is this character of money always causes destructive crises. She sees the solution in a return of money to its original function as a medium of exchange.It would require the abolition of interest. However, the interest is a necessary function in the existing monetary system: it keeps the money in circulation. Because if money is hoarded and not shared, this impedes the economy. Thus there is an interest rate as an incentive for those who have more money than they need to bring it to a levy in circulation. For these outstanding insurance function of the interest rate it would need a replacement.

Margrit Kennedy is the brainchild of Silvio Gesell, a businessman who in 1916 formulated this in his book “The Natural Economic Order.” Society was established by observation of economy stagnation if interest rates were low, because money was withheld, and they prospered when interest rates were high, because money was made available, and that this cycle was subject to constant change . He realized that this phenomenon is due to the fact that money is in contrast to all other goods with virtually no “storage costs” can be retained, so there is a “liquidity benefit”, you can wait until the most advantageous price for the “commodity money” is reached is. His idea was to create a monetary system where money like any other commodity  caoused storage costs, then there would be an economy free from the ups and downs of currency speculation. He proposed to replace the interest rate by a circulation fee, so instead of rewarding those who have more money than they need, so they give it back in circulation, should those who hold back their money from circulation to pay a small toll. While interest rates represent a private profit, should constitute a public use fee income that is brought back into the circulation of money. Silvio Gesell called this money because it is interest free, “free money”, it later became the term “neutral money” was coined because it serves everyone and confers no unilateral advantages, such as the current money system.

But this is not a mere theory! In 1933 a highly successful experiment took place in Austria ( read more about it in my recent post here. )

I do not know if Margrit Kennedy’s approach is the last word, as far as solving the problems of the present monetary system – but I think it’s good to discuss possible solutions, and not just always to moan about the problem.

Should it really come to a collapse of the existing financial system (by experts of the Mayan calendar it may happen from the “fifth night” of the “ninth wave” [18 August to 4 September 2011]), it might help if we know alternatives, to know that a better future is possible.

(translation from a German text by Martina Breier)

13 Responses to “The capitalism is about to collaps… what’s next?”