This post is dedicated to the upcoming birthday (21. Nov) of a great Master, Guru Nanak.

Guru Nanak was born in 1469 in Talwandi, Pakistan and was called a father or what was later called Sikhism. This movement was begun by the Guru Nanak as a challenge to a medieval world dominated by Hindus and Muslims. The Hindus upheld caste law, separating people according to social class. Meanwhile, the Muslims worshipped Allah with little room for tolerance of non-Muslims. Even more important to Nanak than social reform was his belief that his god should be worshiped not through ritual, but through continual prayers to the “True Name.” Nanak believed he could reconcile both Hindus and Muslims to a better path of worshipping the true god who could never be named. 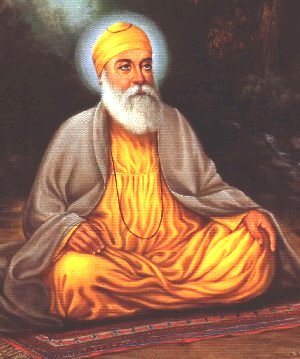 By all accounts, 1496 was the year of his enlightenment when he started on his mission. His first statement after his prophetic communion with God was “There is no Hindu, nor any Mussalman.” This is an announcement of supreme significance it declared not only the brotherhood of man and the fatherhood of God, but also his clear and primary interest not in any metaphysical doctrine but only in man and his fate.

So he began his missionary tours. Apart from conveying his message and rendering help to the weak, he forcefully preached, both by precept and practice, against caste distinctions ritualism, idol worship and the pseudo-religious beliefs that had no spiritual content. He chose to mix with all. He dined and lived with men of the lowest castes and classes Considering the then prevailing cultural practices and traditions, this was something socially and religiously unheard of in those days of rigid Hindu caste system sanctioned by the scriptures and the religiously approved notions of untouchability and pollution.

He spent twenty five years of his life preaching from place to place. Many of his hymns were composed during this period. They represent answers to the major religious and social problems of the day and cogent responses to the situations and incidents that he came across. Some of the hymns convey dialogues with Yogis in the Punjab and elsewhere. He denounced their methods of living and their religious views. During these tours he studied other religious systems like Hinduism, Jainism, Buddhism and Islam. At the same time, he preached the doctrines of his new religion and mission at the places and centres he visited. Since his mystic system almost completely reversed the trends, principles and practices of the then prevailing religions, he criticised and rejected virtually all the old beliefs, rituals and harmful practices existing in the country. This explains the necessity of his long and arduous tours and the variety and profusion of his hymns on all the religious, social, political and theological issues, practices and institutions of his period.

Guru Nanak’s gospel was for all men. He proclaimed their equality in all respects. In his system, the householder’s life became the primary forum of religious activity. Human life was not a burden but a privilege. His was not a concession to the laity. In fact, the normal life became the medium of spiritual training and expression. The entire discipline and institutions of the Gurus can be appreciated only if one understands that, by the very logic of Guru Nanak’s system, the householder’s life became essential for the seeker. The primacy of the householder’s life was maintained. Everyone of the Gurus, excepting Guru Harkishan who died at an early age, was a married person who maintained a family.

Dr H.R. Gupta, the well-known historian, writes, “Nanak’s religion consisted in the love of God, love of man and love of godly living. His religion was above the limits of caste, creed and country. He gave his love to all, Hindus, Muslims, Indians and foreigners alike. His religion was a people’s movement based on modern conceptions of secularism and socialism, a common brotherhood of all human beings. Like Rousseau, Nanak felt 250 years earlier that it was the common people who made up the human race Ihey had always toiled and tussled for princes, priests and politicians. What did not concern the common people was hardly worth considering. Nanak’s work to begin with assumed the form of an agrarian movement. His teachings were purely in Puniabi language mostly spoken by cultivators. Obey appealed to the downtrodden and the oppressed peasants and petty traders as they were ground down between the two mill stones of Government tyranny and the new Muslims’ brutality. Nanak’s faith was simple and sublime. It was the life lived. His religion was not a system of philosophy like Hinduism. It was a discipline, a way of life.”

The following story of Guru Nanak’s death is really beautiful:

When it became clear that the death of Guru Nanak Dev was near, a dispute arose among his followers. His Hindu followers wanted to cremate the remains while his Muslim followers wanted to bury the body following Islamic tradition. Nanak brokered a compromise by suggesting that each group should place a garland of flowers beside his body, and those whose garland remained unwilted after three days could dispose of his body according to their tradition. However, the next morning, upon raising the cloth under which the Guru’s body lay, only the flowers shared between his followers were found. The Hindus cremated their flowers whereas the Muslims buried theirs.The Guru departed to heaven as he came from…

A hymne as a dialog between Guru Nanak and Yogis:

How is one to know the primal Being?
How can he realize his self?
How is the sun to enter
The house of the moon?

When by the grace of his master,
One rids himself of his ego,
Then, O Nanak,
He attains to the state of sahaj.
Eh man nihchal hirdai vasiale
When the mind becomes motionless,
Then, through the master
The primal Being is known.
The breath resides in the navel region;
By the master’s help
One realizes this truth.
The Word abides within,
In its won home;
Through the Word
The light of the three worlds is seen.
The longing for the true Lord
Rids one of one’s anguish,
And one remain satiated
With the love of the true Lord.
The unstruck melody is known
Only through the master;
It is only a rare one
Who knows it true meaning.
Nanak says and speaks
Noth but the truth:
He who is dyed in the true One
Never loses his color.

7 Responses to “The amazing Guru of two religions”