Mokosh, also called Mokos, a Goddess of the Earth, was worshipped by the ancient Slavs.  She is one of the most primeval deities in Europe.  As is true in many countries where reconstructionist Paganism is blossoming, there is currently a significant revival of pre-Christian spirituality and folk traditions in the lands that were formerly dominated by the Soviet Union. Hence, Her presence is being remembered and honored openly once more.

Mokosh – Goddess who gives and takes life, spinner of the thread of life, giver of the water of life. Also known as Mokysha, Mokush. She later evolved into Paraskeva-Piatnitsa – a Goddess of spinning, water, fertility, and health with marriage.

In the Encyclopedia Mythica™ John McCannon writes, “Mokos is most likely a later and more strongly personified variant of the Slavs’ elder earth Goddess, “Damp Mother Earth,” or Mati syra zemlya.” The worship of such a primal earth Goddess was widespread among the Slavs and their neighbors; this is attested to by the fact that the earth deities of a number of Baltic, Phrygian, and Finno-Ugric peoples exhibit similar characteristics and seem to derive from the Indo-Iranian Ardvi Sura Anahita (“Humid Mother of the Earth”)…

As the only female God of note to be worshipped by the Slavs, Mokos assumed a broad range of divine roles. She was first and foremost a symbol of the earth’s fertility. During the early spring, it was taboo to spit on or strike the ground, since Mokos was said to be pregnant then….Holidays were dedicated to Her in the autumn, after the harvest. The belief that Mokos invested the earth with divinity was reflected in peasant practices that, in some parts of Russia, Ukraine, and Belarussia, persisted into the 19th century: the swallowing of a lump of soil to consecrate wedding vows, the placing of earth upon one’s head to seal oaths, the confession of one’s sins to a hole in the ground instead of a priest.

Over time, Mokos became a patron of women, especially those bearing children or giving birth. She oversaw women’s work, such as spinning and weaving. She was also thought to protect flocks of sheep. The strength of her cult remained substantial, even after the Christianization of the Slavs; as late as the 17th century, Orthodox priests attempted to uncover Mokos-worshippers among the peasantry, asking women whether or not they had ‘gone to Mokos.’

In fact, Mokosh is the only female deity mentioned in the Kievan pantheon that was established by Vladimir I in 980 CE. In northern Russia, She has survived as a house spirit, Mokysha or Mokusha; a tall woman with a large head and long arms.

Known throughout Romania, Russia, Poland, Czechoslovakia and the Ukraine, Mokosh can be either benevolent or malevolent. She is linked to the waters of the sky and the moist soil, to the fertility of the Earth and its creatures, to spinning and weaving, and to fishing. 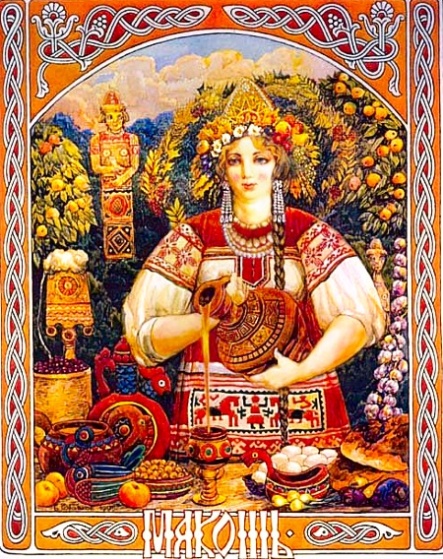 Images of Her survive to this day in Russian art and embroidery.

She is related to Hecate and Aphrodite in classical western mythology, to Goddness Lakshmi in Indian myphology and to Zhyva and Morena in the western Slavic mythology. In the Russian Orthodox tradition She became intertwined with Saint Paraskevia (from the Greek paraskevi, which means “Friday,” a day that was always associated with the Goddess.) Later, especially under the attempted secularization of the people of the Soviet Union, Her name became synonymous with the good black soil of Mother Russia.

What’s really interesting, is that the word Mokosh seem to have a close correlation to a Sanksrik word “Moksha”, meaning Nirvana, the total divine bliss…

HAPPY DIVALI TO EVERYONE 🙂