The phenomenon of Russian spirituality and Seraphim of Sarov April 19, 2010

Russians are proud to be spiritual people, spirituality is a popular word in there and is being often misused even by politicians. After the communism-era, which I believe itself was in a way very spiritual (because people were motivated by high ideals), the traditional Russian values are back with even more power. Spirituality has been obviously a mass phenomenon in Russia unlike in many other parts of the world.

Despite this fact, I find it highly interesting that Russia is not famous for its spiritual leaders, the more so there has been not a single world-famous spiritual leader in Russia (let’s say of a great caliber of Zarathustra, Lao Tse, Moses, Mohammad). Apparently there have been several quite powerful saints, but none of them had a nation-wide impact. I wonder where od the roots of Russian spirituality are emerging from? What makes people so desperately seeking for the highest, go beyond materialism, being ready to sacrifice a lot for the truth?…

Whatever the reason is, Russia gave birth to quite a number of saints that are not well known but yet have been an enlightening example of spirituality. One of the most famous and loved one is Seraphim of Sarov. 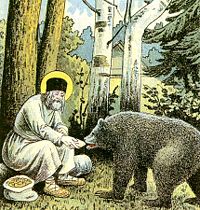 Saint Seraphim of Sarov (Russian: Серафим Саровский) (1759 – 1833),  is one of the most renowned Russian monks and mystics in the Orthodox Church. He is generally considered the greatest of the 19th century startsy (elders) and, arguably, the first. He is remembered for extending the monastic teachings of contemplation, theoria and self-denial to the layperson, and taught that the purpose of the Christian life was to acquire the Holy Spirit.

Seraphim (born Moshnin) was born in 1759 to a merchant family in Kursk. At the age of 10, he became seriously ill. During the course of his illness, he saw the Mother of God in his sleep, who promised to heal him. Several days later there was a religious procession in Kursk with the locally revered miracle-working icon of the Mother of God. Due to bad weather, the procession took an abbreviated route past the house of the Moshnin family. After his mother put Seraphim up to the miracle-working image, he recovered rapidly. While at a young age, he needed to help his parents with their shop, but business had little appeal for him. Young Seraphim loved to read the lives of the saints, to attend church and to withdraw into seclusion for prayer.

At the age of 18, Seraphim firmly decided to become a monk. His mother blessed him with a large copper crucifix, which he wore over his clothing all his life. After this, he entered the Sarov monastery as a novice. From day one in the monastery, exceptional abstinence from food and slumber were the distinguishing features of his life. He ate once a day, and little. On Wednesdays and Fridays he ate nothing. After asking the blessing of his starets (i.e., a spiritual elder), he began to withdraw often into the forest for prayer and religious contemplation. He became severely ill again soon after, and was forced to spend most of the course of the next three years lying down.

St. Seraphim was once again healed by the Most Holy Virgin Mary, Who appeared to him accompanied by several saints. Pointing to the venerable Seraphim, The Holy Virgin said to the apostle John the Theologian: “He is of our lineage.” Then, by touching his side with Her staff, She healed him.

Because of a special vision of the Mother of God he was given toward the end of his life, St. Seraphim took upon himself the feat of becoming an elder. He began to admit everyone who came to him for advice and direction. Many thousands of people from all walks of life and conditions began to visit the elder now, who enriched them from his spiritual treasures, which he had acquired by many years of efforts. Everyone saw St. Seraphim as meek, joyful, pensively sincere. He greeted all with the words: “My joy!” To many he advised: “Acquire a peaceful spirit, and around you thousands will be saved.” No matter who came to him, the starets bowed to the ground before all, and, in blessing, kissed their hands. He did not need the visitors to tell about themselves, as he could see what each had on their soul. He also said, “Cheerfulness is not a sin. It drives away weariness, for from weariness there is sometimes dejection, and there is nothing worse than that.”

“Oh, if you only knew” he once said to a monk, “what joy, what sweetness awaits a righteous soul in Heaven! You would decide in this mortal life to bear any sorrows, persecutions and slander with gratitude. If this very cell of ours was filled with worms, and these worms were to eat our flesh for our entire life on earth, we should agree to it with total desire, in order not to lose, by any chance, that heavenly joy which God has prepared for those who love Him.” 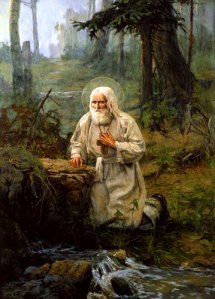 Here are some quotations by Seraphim of Sarov: